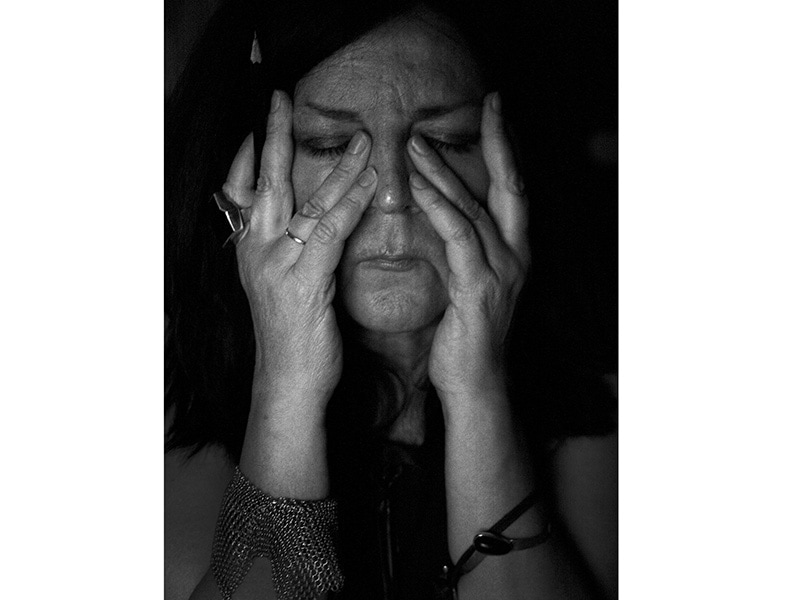 
“You have to live your life in [such] a way that if you collapse then everyone believes it has happened due to the ultimate feeling of happiness.” This sentence is quoted on the website of HOP gallerii in Tallinn, where in September 2022 Kadri Mälk produced a two-day installation. The quote, from tragi-comedian Ervin Abel, has resonated with me since I found it on the first day of 2023, the day Kadri passed away.

Kadri lived her life intensely. Her life was full and rich with emotions, events, work, teaching, exhibitions, publications, writing, collecting jewelry, making plans, travel, and receiving cultural decorations and recognition (such as the Portuguese Order of Merit). The jewelry department at the Estonian Academy of Arts, in Tallinn, was her life and her love. She gave a lot while also being quite demanding. When she wanted something, the outcome would happen the way she wanted it.

At the end of last year, no one was able to convince her that it was unwise to undertake so many journeys in her frail health. She collapsed at the end of a tour that brought her to Lisbon, Amsterdam, Padua, and Munich confined to a wheelchair—it was her farewell tour. Although seriously ill for some time, Kadri’s mind was filled with plans and hopes for the future, but her body couldn’t go on. Let’s hope she found the ultimate feeling of happiness while visiting friends in different European cities.

This enigmatic woman, from a small Baltic country (Estonia has a population of only 1.3 million people) at the outskirts of northeastern Europe, was an extraordinary figure on the Estonian and international contemporary jewelry scene. She was utterly dedicated to her artistic work, to that of her students, and to her school, where she had earlier studied under Professor Leili Kuldkepp. In the mid 1990s, Kadri was asked to take over Kuldkepp’s position. She had finished her gemology studies in Finland and had started to work in Bernd Munsteiner’s lapidary studio, in Germany, but she returned home in 1994 and took over as head of the jewelry department. She was appointed professor in 1996.

Her jewelry and her teaching led to a new conception of contemporary jewelry, far from 20th-century Westernisms. Without her wanting to, an Estonian school was born, mysterious, poetic, narrative, quiet, sculptural, and unique. Kadri would say that her teacher, Kuldkepp, had already established this school.

As a young girl Kadri was rebellious and a hippie. As a grown-up she remained a rebel who fought for every worthy cause. She adopted black as her favorite color. It is the prevalent color of in her work, with touches of blue, red, and violet, resulting in a gloomy atmosphere. Together with her black hair, mysterious voice and way of talking, sad glances, robes, and hats, she had a witchy appearance that frightened the level-headed rationalists among us. Her reputation as a dark magical sibyl, a spiritual nature who lived to the extremes, preceded her. When I met her the first time, in Tallinn almost 20 years ago, I felt she coincided with the mythical, Gothic, dark atmosphere of the city. Yet she confessed that she was essentially a girl of the forest, enjoying the majesty of trees, the mushrooms, the wolves. Kadri was a romantic and spiritual being. “Somewhere there is a bigger plan. And we must trust it,” she wrote.[1]

Kadri trusted the subconscious and materiality. She knew that materials and jewelry had a soul. All she had to do was get to know them better, listen to what they had to tell her. The physical properties of materials inspired her, but even more so did their spiritual properties, such as providing protection and giving energy. When she used mole skin, the myopic animal and its peculiarities were in her mind. She regarded her materials with awe. But she didn’t shy away from using artificial materials such as Cibatool. The artist and her materials were equal. She did not impose something on them or fight them. She found the way that the material needed, whether with stones, jet, or mole skin.

Creating a piece of jewelry was a delicate matter. In an interview with Peeter Laurits, Kadri explained: “Spending a night with a newly completed work is very clarifying (…) Sometimes I do it with stones as well, to get to know them better. Sifting through the subconscious, I could say.”[2] She didn’t get much sleep. Working the whole night long was not unusual. She could only work at a slow pace, as she explained in the same interview: “When you rush something, you lose the cosmic perception. Things must be allowed to happen. With some works I feel like someone is tapping on my shoulder, saying ‘it’s time…’ And kairos!—the fatal moment of recognition, you shouldn’t let it pass [by], losing the rare chance of singularity and intrinsic values in your life.”[3] Despite the deliberate approach, her production was considerable.

In her house, the rooms, tables, and shelves were filled with work in progress, fragments put together on sheets of paper with drawings, sketches, and small clues or notes. Pens, tools, and paint lay nearby. I remember her rummaging through the rooms all night when I stayed with her. The next morning a breakfast awaited me, small delicacies on plates next to unfinished pieces of jewelry in stages of becoming. All was arranged with great care, beautiful and inviting. The magical, esoteric, and ritualistic were all part of Kadri’s daily life and work.

Kadri considered jewelry the most charged of all arts because of its intricate connection with people. Once, Kadri sent me a brooch with my name and the word “love” carved in it. It was a swap for a text she had asked me to write. When I asked her some questions about the piece, Kadri’s answer was honest and meaningful: “It is blessed. In the real sense, I did [(it] in the church where I was baptized.” Together with another statement by Kadri—“Everything you create is made of the material of your own soul”—this simple carved Cibatool brooch was suddenly imbued with meaning. No further questions.[4]

Kadri’s interviews are drenched in words that might sound false coming from another mouth: subconscious, soul, spirituality, crystallization, solitude, hesitation, crisis, fear, intensity, mental energy, alchemy, magic, the sublime. But these words accompanied her work, and her jewelry reflects many of these ideas. By talking and corresponding with Kadri and studying her work, I learned to find other dimensions in jewelry.

Nocturnus was a three-day jewelry event organized in an abandoned 19th-century manor house on the island of Muhu. It immediately established the fame of the Estonian jewelry scene and of Kadri Mälk internationally. Kadri managed to get 32 artists from different countries and continents to come to this isolated place where during three subsequent evenings, starting at 9:00 p.m., a symposium took place, with music, lectures, and meals in the darkness under the trees near the sea. There are those who participated and attended, and those who did not. (Unfortunately, I am in the latter category.)

Just Must (which means “Just Black”), an international jewelry exhibition in the Estonian History Museum, in Tallinn, was Kadri’s confession to black. Fifty-eight international artists participated. A beautifully designed and presented book accompanied the show. In the introduction, Kadri wrote: “I would like to say that the reasons for this exhibition and its title do not come from me, they were given to me from above, unconditionally. From the heavens.” And also: “…it is clear that in darkness all colors agree. It is darkest just before sunrise. This is when hope emerges, black entails a reflection of the promise.”[5]

Together with Tanel Veenre, Kadri put together Õhuloss/Castle in the Air, a book about the collective of the same name (which has existed since 1999) that included her “blood brothers and sisters”: Tanel Veenre, Piret Hirv, Eve Margus-Villems, Villu Plink, Kristiina Laurits (and for some time Katrin Sipelgas). These kindred spirits put on many exhibitions together, for instance in Lisbon, in 2001. After that, Kadri returned to Lisbon regularly. For this book, Kadri also invited other people to dream by reflecting on the question “What does castle in the air mean to you?” The book was again a dream come true.

Testament was Kadri’s candid book about her life and work. The title was somewhat scary, but she was still alive and working intensely on new work. She had also started painting Orthodox icons. The last book, Hunt, was about her jewelry collection, and it showed people she knew each wearing a piece from her collection. In a sense, the book is also a collection of portraits of friends, colleagues, artists whose work she cherished, writers, and all those others who had a place in her life. It was thanks to her consistent and inspiring personality, and the particularity of each project, that people loved to collaborate with her. This also allowed her to find sponsors for all her projects inside Estonia and abroad. Kadri loved to forge connections between people.

Since 2003, when Kadri was on a residency in Portugal, she had felt a strong emotional connection with this southwestern European country and its melancholic atmosphere. She became close friends with Cristina Filipe. They initiated a series of exchanges between students and teachers at Ar.Co, in Lisbon, and the Estonian Academy of Arts, as well as exhibitions in Tallinn and Lisbon. Kadri dedicated 2021 to Cold Sweat, a major event in Lisbon organized by her “dark sister,” Cristina Filipe, and PIN (the Portuguese Association of Contemporary Jewelry). Cold Sweat took place in September 2021 and included a symposium, exhibitions, and a publication. The event’s name, influenced by the pandemic, originated from Kadri. Her support for this event and for Portuguese jewelry in general was enormous. On November 5, 2022, Kadri was in Lisbon to present the book Cold Sweat, which had been so long in the making. She looked frail, but she was there.

Her last exhibition, in Tallinn in September 2022, was an exertion, and a true blast. For two days, Kadri transformed the gallery space into a living room divided into different parts—a kitchen, an office, a library, and an esoteric corner. Bookcases lined the walls, filled with books, personal objects, memorabilia, photos, cards, jewelry, bags, and even shoes. A table was covered with delicacies and drinks (Kadri always took great care of her guests). Her own jewelry and drawings, mixed with jewelry (from pupils and art friends) from her private collection, hung pinned to the walls. The installation was part of the VII Tallinn Design Festival’s satellite program, Green Being: WTF? Reuse was a motif in Kadri’s work, though not the main one. The objects she used in her work were sometimes personal, such as her grandmother’s mole skin fur coat, but other times she used found objects, such as an antique fish knife, antique patches of embroidery and lace, coil springs, or antique ornaments. But the installation Kadri Goes Green, for which she moved her own stuff into the gallery, transforming her everyday objects and an everyday atmosphere into a work of art, was the ultimate statement of reuse.

We cannot thank Kadri Mälk enough for all she did for Estonian and international jewelry. As a person, she made a lasting impression on everyone she met. As an artist, professor, and organizer, she leaves a legacy that seems too much for a lifetime.