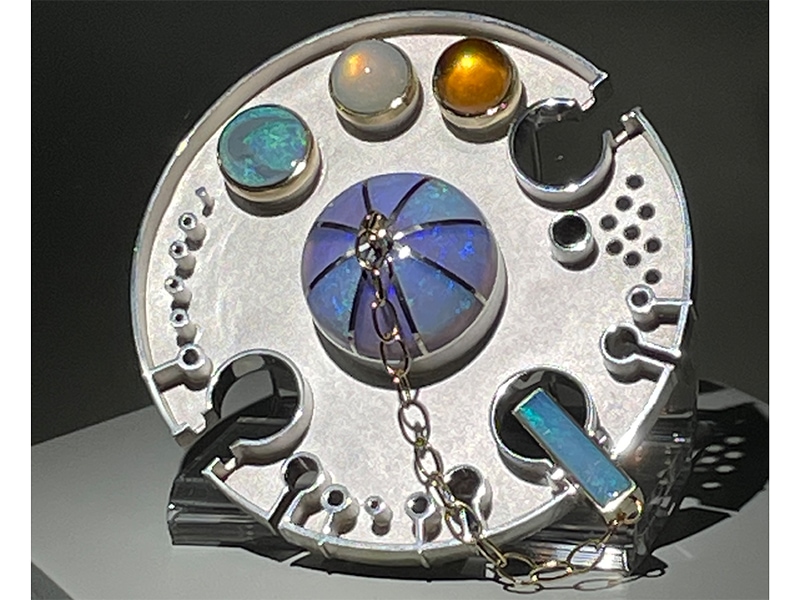 
The Tucson show starts this week. If you’re planning to come, you won’t want to miss a new-ish gem in town. The University of Arizona Alfie Norville Gem & Mineral Museum celebrated its grand opening in February 2022. Visit, and you’ll find cases bursting with gorgeous specimens, of course. The vitrines, with names like “Minerals: Star Stuff,” “Geology and Biology Intertwined,” and “Stewardship of the Earth,” explain various aspects of mineral formation, mining—especially because Arizona is a significant producer of non-fuel minerals—and more.

But way more exciting than that, about a third of the space is devoted to some carved decorative objects and lots of jewelry produced in the last 40 years or so by studio jewelers, a number of them from Idar-Oberstein. The final room showcases the jewelry that art jewelry lovers will be most interested in. Represented in the collection: Bernd, Tom, and Jutta Munsteiner; Charles Loloma; Alan Revere; Barbara Minor; Kent Raible; Jesse Monongya; Paula Crevoshay; and many others.

Labels give the names of the artists, materials used, and so on. But hopefully the museum will consider adding signage that more deeply describes the jewelry on display. Loloma’s importance could have been communicated near his cuff, for example, and there are many, many pieces by the Munsteiners, but no explanation of their significance in the world of gem cutting.

Note: When you’re in Tucson, be sure to visit the Yun Gee Park Gallery & Atelier. The current exhibition there is Moon Drops: International Contemporary Pearl Design, through February 18, 2023. It features work by Melanie Georgacopoulos, Malgosia Kalinska, Peter Schmid, Lin Stanionis, Cindy Sumner, and Kiwon Wang—and the gallery has a lot of additional art jewelry.